On April 16, 2017 there was an earthquake in Ecuador of 7.8 ° magnitude. In 24 hours, more than 500 deaths were assessed, so on April 18 the USAR Ericam and UME groups are activated. The ERICAM (Madrid Immediate Response to International Catastrophes Group) was given two hours to be on their way to the operational meeting point, and shortly after the author of this article together with the rest of the team were moving the material to the truck to take it to the Torrejón de Ardoz Military Airport.

In this article the author will describe her experience in this mission and will describe in detail the modus operandi followed as it is prescribed.

“The departure to Ecuador lasted until April 29, we went with the EMU (Military Emergencies Unit), whom we were working as a team with. We did several search operations in the towns of Canoa and Manta. It had been more than four days after the earthquake, although there were still aftershocks.

On the fifth day we rescued all the sanitary and electromedical material we could from the General Hospital of Chone. The hospital workers were on the street, they had barely been able to extract electromedicine material to be able to attend to the patients, so we helped them to recover their autonomy, in a situation of great lack of economic resources for them (the value of the rescued material exceeded the million dollars)

We continued with more collaborations in buildings of high importance for the population of Bahía de Cadaquéz until the 25th.” 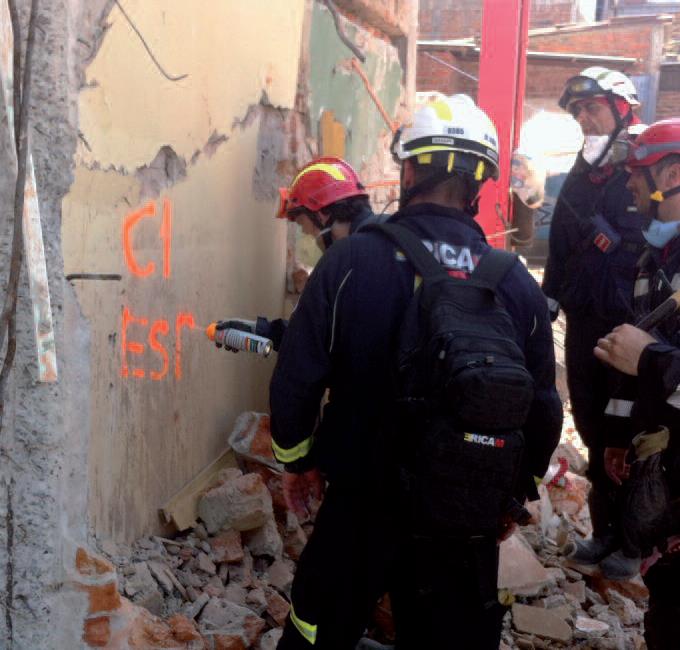 For the health personnel (both doctors and nurses) to be part of ERICAM, they must have a Master / Expert in Emergency that is homologated by the Madrid public administration to obtain authorization for sanitary transport. It is recommended to have specific training in tropical diseases on top of that. All team members belong to the Medical Emergency Department of the region of Madrid of SUMMA 112.

The health personnel team (Health Intervention Team – EIS) is responsible for training the rest of ERICAM about transmission of infectious and contagious diseases. Regarding the health and hygiene practices, both during the practical and actual activation periods, the EIS carries out a zoning where the uniformity used after the search and rescue is deposited, prior to the refreshment and rest area (namely ‘dirty’ area and ‘clean’ area).

It also in charge of providing all hydroalcoholic liquid the personnel need for handwashing. It is usually hard to have access to clean or running water.

Other specific functions are:

ERICAM, like the other USAR groups, requires periodic specific training and must be passing an exam before INSARAG to continue to be accredited as an International Urban Rescue Group. This test is performed every five years. It was in May 2016 when ERICAM was last examined.

In addition, the group had to undergo a review of its facilities by European external auditors (the base of Insarag is in Geneva) and also had to pass an exercise in Germany of activation and action in the event of a hurricane. There, in the German town of Weeze, all the team had to operate the simulation under examiners 36 hours in a row.

In addition to the initial action as an urban rescue team, when the first arrived in the disaster zone, it was necessary for the ERICAM group to organize the coordination center (OSOCC) and the USAR equipment reception and departure center (RDC). 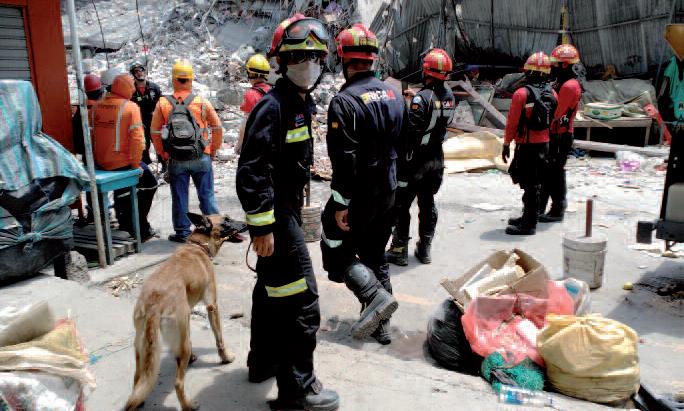 “Regarding safety measures, in addition to wearing our PPE (personal protective equipment with special boots, safety helmet, etc.) we had toxicity checks, which we use to see if there were dangerous chemicals in the search area”.

Another safety detail: Insarag certified USAR teams must have completed the BSITF (Basic Security in the Field) United Nations Course for all staff.

Also, depending on the information the team collects about the area to which they are activated, their uniformity must be adapted in the way that it is most appropriate to the climatic characteristics of the damaged area.

A member of the health team (medical or nurse) during the search for victims performs the quantification and identification of members of the group when they are admitted and when they leave in the midst of the rubble of the sweeping area.

In addition to the above, before initiating action manoeuvres, an evacuation plan must be planned in case of new earthquake aftershocks, or other adversities. 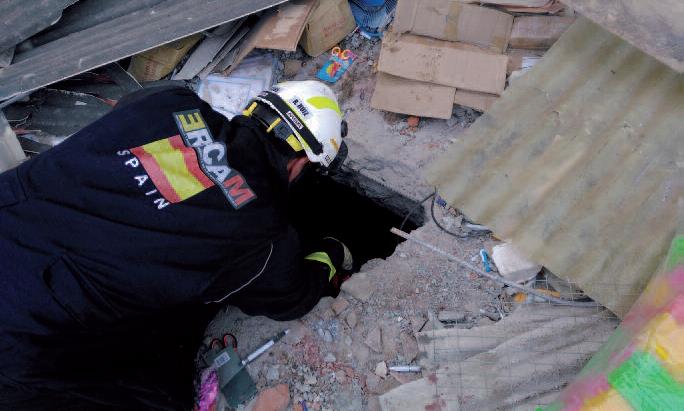 I have already talked about several measures that are carried out before the activation of the group. There are also other very important ones to value. In ERICAM we are continuously informed of the catastrophes that occur, thanks to the GDACS, to which we are connected. The GDACS (www.gdacs.org) is a warning and coordination system for disaster response, which provides information almost in real time to the community, about catastrophes and natural events that occur all around the world.

It also provides tools to facilitate the coordination of the response. It is activated when the affected country has exceeded its capacity to assimilate the disaster.

Before starting the search tasks in collapsed structures ,the  coordination of media and workplaces is essential. To achieve this, the coordination center from the country of arrival will provide the team with maps to delimit and sectorize the areas in which they will work.

An extra piece of material to be always brought about is spray paint. This is very important, because it serves as an instrument for marking and signalling the collapsed structures on which the team members work, both in the search phase, and in the rescue phase, and also when they have finished.

The international INSARAG coding system allows, by means of a code known to all, to provide specific information to any USAR person or group that approaches the area.

The marking is done in a visible area of the collapsed structure. It allows all teams to share key information, such as the internal state of the structure, if there are additional dangers, the number of victims alive, the number of dead people that have been found, and through visual signage it allows others to identify the equipment that has worked in that area.

The start-up of USAR teams favors the coordination of disaster relief. The specific health profile for the staff, both medical and nursing, that integrates these teams, is far from the merely assistance, but it is much broader than that required for work in daily emergency services.

It is beneficial to publicize and promote the development of skills and knowledge of firefighters, nurses, medicine, emergency technicians and dog guides required for this field.

Unfortunately regarding the work we did in Ecuador, the statistics were confirmed about the difficulty of finding living victims as time goes by. Our work was otherwise productive in favour of the affected population.

The shortcomings of the Austrian medical system